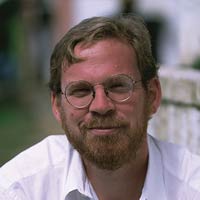 Michael Hawley is an educator, computer scientist, musician and photographer who serves as impresario of EG. Educated at Yale and MIT, he held industrial positions at Bell Labs, IRCAM in Paris, Lucasfilm in San Rafael, and NeXT in Palo Alto. For many years, Michael was the Alex Dreyfoos Professor of Media Technology at MIT. He plays the piano (won the Van Cliburn amateur competition in 2002) and has a passion for photography (produced a notable photographic book on Bhutan). Michael lives in an old church in Cambridge where his family includes a quirky HImalayan mastiff (Tashi), an adopted Bhutanese daughter (Choki) and his beloved bride Nina You.