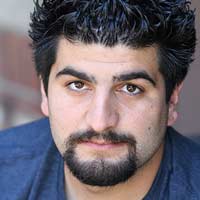 Nick Mandracchia has been seen the past few years acting in Santa Cruz, San Jose, Los Gatos, and Sunnyvale. A Shakespeare fanatic, favorite roles he has played are Marc Antony in Julius Caesar, Benedick in Much Ado About Nothing, Antipholus of Syracuse in The Comedy of Errors, and Nick Bottom in Midsummer Night’s dream. Other theatre credits include Amadeus and Coney Island Christmas (City Lights Theatre Company) The Beard of Avon (Santa Cruz Shakespeare) and multiple plays/musicals at Foothill College.