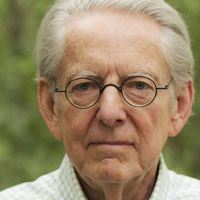 Paul Davis, American illustrator and graphic designer, was born and raised in Oklahoma. He attended the School of Visual Arts in New York on scholarship, and his work was first published in Playboy 1959 while he was still in school. He was a member of the acclaimed Push Pin Studios from 1959 to 1963, developing a distinctive style that influenced a generation of illustrators.

Davis’s work has been featured on the covers and in the pages of magazines around the world, among them Horizon, American Heritage, McCall’s, Redbook, Life, Look, Ladies Home Journal, Esquire, Playboy , Rolling Stone, Evergreen Review, New York, The New Yorker, New York Times, National Geographic, Harper’s Bazaar and Time. He was the founding art director of Normal and Wigwag magazines.

He created posters for Joseph Papp for 17 years at the New York Shakespeare Festival and the Public Theater and was art director for The Public Theater from 1984 to 1991. He received a special Drama Desk award for his work for Papp and his Three Penny Opera poster is in the collection of the Museum of Modern Art. (Photo by Matthew Davis)